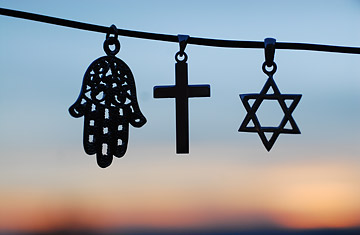 Ramadan also spelled Ramazan, Ramzan, Ramadhan or Ramathan, is the ninth month of the Islamic calendar, observed by Muslims worldwide as a month of fasting (sawm), prayer, reflection and community.

A commemoration of Muhammad's first revelation, the annual observance of Ramadan is regarded as one of the Five Pillars of Islam and lasts twenty-nine to thirty days, from one sighting of the crescent moon to the next. Fasting from sunrise to sunset is fard (obligatory) for all adult Muslims who are not acutely or chronically ill, travelling, elderly, breastfeeding, diabetic, or menstruating.

The predawn meal is referred to as suhur, and the nightly feast that breaks the fast is called iftar.

Although fatwas have been issued declaring that Muslims who live in regions with a midnight sun or polar night should follow the timetable of Mecca, it is common practice to follow the timetable of the closest country in which night can be distinguished from day. The spiritual rewards (thawab) of fasting are believed to be multiplied during Ramadan.

Accordingly, Muslims refrain not only from food and drink, but also tobacco products, sexual relations, and sinful behavior, devoting themselves instead to salat (prayer) and recitation of the Quran.